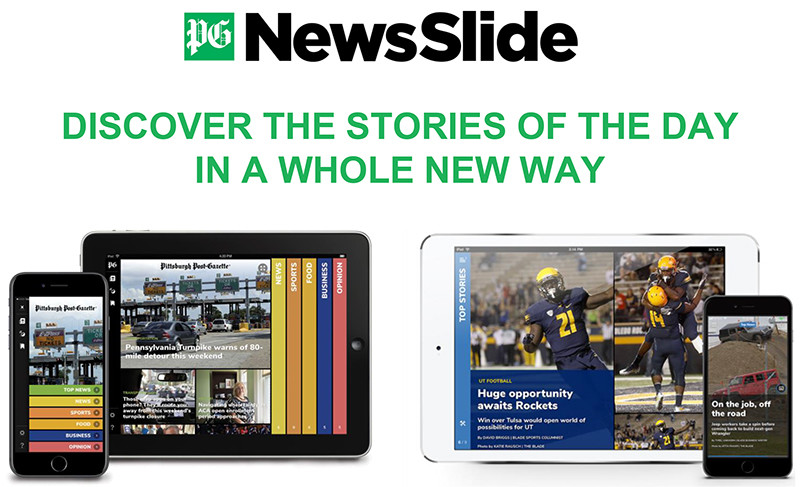 Block Communications markets NewsSlide as "more than an app." Instead, it's a new way to present news and advertising combining the best of print, TV and internet with the goal of immersing the reader.

Block executives call it a game-changer.

"It starts with the content," said Lisa Hurm, vice president and general manager of the Pittsburgh Post-Gazette. "We needed a content strategy that appeals to people who really wanted to know what the news of the day was."

The newsroom's role (www.pgnewsslide.com) is centered on storytelling, Hurm said. Advertising is interactive. The app is structured to make looking at stories and ads easy for the reader, without pop-ups or ads that look like they were shrunk down from newspaper size and dropped at random into the middle of stories.

"I personally believe that kind of reader experience is what has led to the downfall of programmatic advertising and to the development of more and more ad blockers," she said. "We've damaged the experience of content by creating apps that really were more intrusive than they were advantageous to advertisers."

A multimedia company, Block Communications is based in Toledo, Ohio, and publishes The Blade as well as the Post-Gazette. Since NewsSlide launched in October, download numbers are 36,000 for the Post-Gazette and nearly 30,000 for The Blade.

"NewsSlide is a new news medium," said Kurt Franck, president/general manager and executive editor of The Blade. "It immerses you in the news of the day, along with award-winning journalism. It's also a dynamic tool for advertisers to let their customers play, listen and see advertising messages like never before. NewsSlide is the ultimate vehicle for e-commerce transactions for advertisers."

The old mobile publishing platform was a traditional feed of news, breaking news and items curated by an editor. "It doesn't provide the storytelling experience, or the edition type of experience. There was really very little revenue," Hurm said. NewsSlide, on the other hand, showcases photography and also uses video to immerse people in a story.

NewsSlide has proven to be especially good with interactive stories, Hurm said. Although the topics are on opposite sides of news/features spectrum, the two papers have been successful with their extensive coverage of the regional opioid crisis as well as with food, whether restaurants or recipes.

"Nothing is better than being able to combine photography and video in a story about a new recipe," Hurm said.

Ads that have worked well on NewSlide include those for universities, e-commerce and real estate. Real estate customers "like the way that you can actually click on something and go inside the house and take a tour." Other advertisers have offered puzzles to solve for a prize, and a pizza place lets customers order through the ad.

Hurm said some advertisers have actually been turned down for NewsSlide placement, although the staff will try to redesign an ad to better fit into the format.

"First of all, we're very picky about the kind of advertising that we put in it," Hurm said. "There has to be a high level of quality to the advertising. We have to have interactivity that leads the reader to a good experience for the advertiser. It can't degrade the content that it lives beside or inside the edition."

A shooting range was a longtime advertiser; the staff arranged for the NewsSlide ad to be placed somewhere that would not conflict with the content. An annual RV show was a large print advertiser. Show organizers wanted to place the same print ads on NewsSlide. Instead, a redesigned ad included a 360-degree tour of the inside of an RV.

NewsSlide forced the advertising staff at each paper to refocus on digital sales, Hurm said.

The app is still developing; for example, separate versions were launched for smartphones and tablets. The role of breaking news on each version is also being studied.

"One of the things our industry tends to do is just repurpose the same content across all our vehicles," Hurm said. "That is something that we're taking a strong look at. Does that make sense, or should we have individualized content for different products?"