Beyond the newspaper market 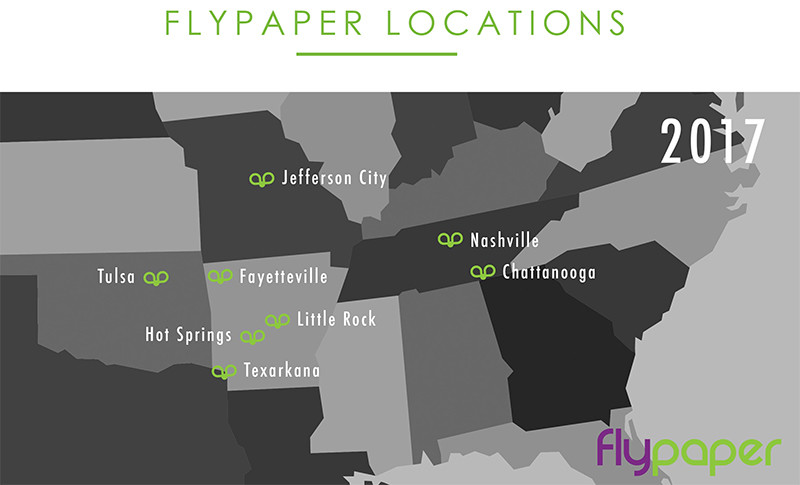 Flypaper, WEHCO Media's local digital marketing agency, started out in cities and towns served by WEHCO properties, but it's not necessarily connected with newspapers. In fact, Flypaper has moved into an entirely new market in Nashville, Tenn., and the agency intends to keep growing.

"There weren't many agencies servicing the small- to medium-size business, somebody with less than 20 employees or a single retail location or a few trucks at their service company," Gallaty said.

"We always meet with our customer face to face every month," Gallaty said. "That personal touch really differentiates us in the market. But there's a limitation to that, which is we can only drive so far and still make it a profitable business. So there's a geographical limitation."

Gallaty said the sales forces learned that they could reach customers as far as two hours away from a single location, but the in-person approach wasn't as effective as driving distance increased and conference calls and video conferences became tempting substitutes.

The most telling statistic may be this: 89 percent of all Flypaper customers have never advertised in WEHCO's newspapers. And, said Gallaty, "We actually grew faster in Nashville than we were growing in our newspaper markets."

The Nashville experiment began in January 2017. Gallaty said Flypaper wanted a booming market with high residential growth in a city relatively near its existing markets, but without a WEHCO property. Today, the so-called remote office employs a dozen people. Originally projected to be profitable in two years, executives now expect Nashville to show a profit in 18 months.

With five years behind Flypaper, the Nashville operation benefitted from refinement and improvements in the agency's operations, Gallaty said. "But, it also really shocked me that the megaphone of the newspaper wasn't as necessary as we thought it would be in order to start up a new business. In some cases it's actually to our advantage to have kind of a blank slate in the community."

Without an existing base of advertisers or subscribers from which to start drawing customers, Flypaper had to operate differently in Nashville. Relying on and promoting its stand-alone branding was critical, and so was building an aggressive sales and customer service force. Flypaper staffers turned up at many chamber-of-commerce events and made cold calls both by phone and in-person to introduce themselves, Gallaty said.

Next up is Charlotte, N.C., where Flypaper hopes to open its second remote location in the middle of this year. Currently Flypaper is researching the market and looking to hire a strong staff.

Revenue is being reinvested into expansion, but the numbers are startling. According to its Mega-Innovation entry, Flypaper revenue has grown an average of 114 percent per year over the past four years. Flypaper makes up nearly half of all digital revenues for WEHCO and more than 90 percent of its digital revenue growth. The original agencies all boast double-digit profit margins.

Flypaper is now considered a long-term business, Gallaty said. "Our long-term strategy is continued growth and expansion into markets where it makes sense for us to operate. We still see growth in our markets that have been around for five years. We're still increasing revenue and increasing profit."