GateHouse Live puts on the show 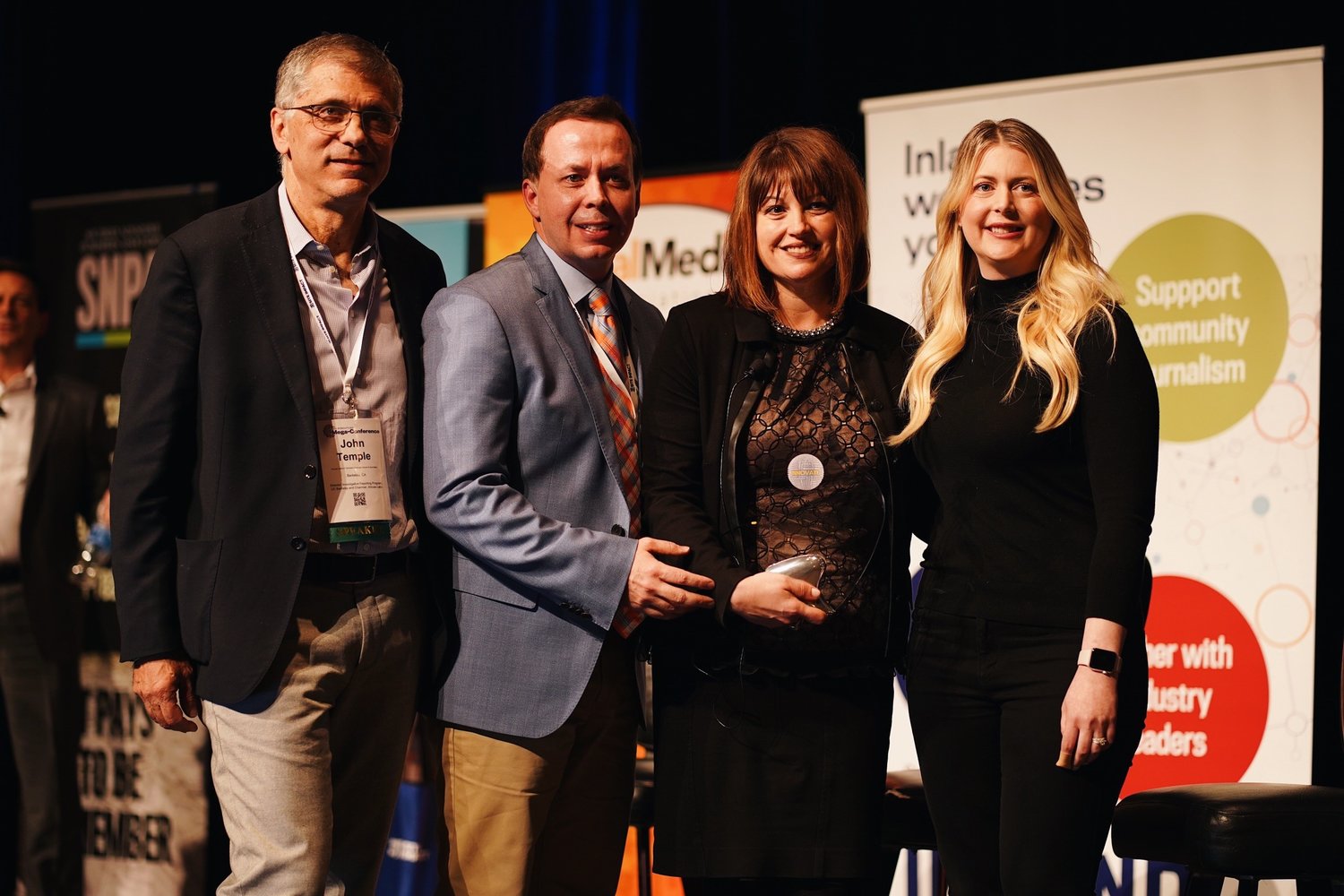 Pictured left to right: John Temple (one of the Mega-Innovation Award judges), and Jason Taylor, Rebecca Capparelli and Lyndsi Lane of GateHouse Live.

View Video (We are GateHouse Live)

GateHouse Live was the recipient of the Mega-Innovation Award presented Tuesday afternoon at the Key Executives Mega-Conference.

Putting on events has much in common with publishing, according to Jason Taylor, president of GateHouse Live and New Media Group Ventures.

Publishers, he said, create content that attracts an audience, and they try to monetize that audience. "An event does the exact same thing."

Events such as expos and concerts put on by media companies also engage a community, as do news media regardless of platform, Taylor said. GateHouse Live puts on events for all its properties and has found that in smaller communities, theirs are often the largest.

"The general population has a screen in front of their face all day long," he said.  "We need community and the sense of community. Our events provide that for markets all across the United States."

While many traditional publishers stage an event or two during the course of the year, the selling techniques differ and planning, promotion and staging put a burden on the local staff. As a separate division of GateHouse Media, GateHouse Live goes to the local community to handle almost everything.

Putting on events benefits publishers because events generate specific leads for future advertising, Taylor said. Someone who attends an event, engages in a promotion or reserves a booth is interested in the subject and is more likely to respond to an advertising proposal. Event and promotion sponsors also receive useful data on who has attended and shown interest in a particular product.

There's no doubt that GateHouse Live has succeeded in generating new revenue. According to its Innovation Award entry, GateHouse Media generated less than $1 million in event-related revenue in 2015. GateHouse Live kicked off its first event in 2016, and generated $8 million in the first year. In 2018, revenue was over $42 million, and projections for this year are over $60 million.

"I think historically we were always looking at events as a one-time, one-day generator of revenue, or one weekend hypothetically," Taylor said. "Now we're able to leverage the promotions platform to engage readers and the community in contests, quizzes, etc., that keep them passionate about the event and/or related topics."

GateHouse Live has grown to a 40-person staff. A GateHouse Live team comes into the community to teach local sales staffs how to sell the event, build lead lists, and develop sales packages and promotional materials. The team also handles branding, design, logistics and production.

Taylor particularly commended vice presidents Rebecca Capparelli and Lyndsi Lane for their work in developing GateHouse Live. The staff started out small and continues to expand.

After the events, local communities are responsible for following up on new leads and new advertisers who participated in the event, and for retaining inactive advertisers who returned for the event, Taylor said. It's possible to keep revenue and engagement going for months afterward.

The events themselves fall into four broad categories: expos, awards, races and music.

The events can be sized up or down depending on location. Taylor said attendance has ranged from tens of thousands to 800 or so. Total attendance in 2018 was well over 600,000.

"The majority of the ideas come from the GateHouse Live team. At the same time we have many good ideas that do come from the field," Taylor said.

While ideally GateHouse Live likes to start working on an event five or six months ahead, the staff is capable of moving much more quickly to turn around a good idea or try something new. Usually they make an initial site visit to talk about how to sell and promote the event, then return to town closer to the event date.

Overall, GateHouse Live often can bring in world-class production and larger events than a single local media company could stage by itself, while providing the training to maximize the benefits, Taylor said.

"It excites local markets and local sponsors to see what you can pull off in their town."

Judges for this year's contest were John Temple, director of the Investigative Reporting Program at the University of California-Berkeley and chairman of Amuse Labs; Carol Hudler, founder of Hudler Success Strategies; and James M. Moroney III, publisher emeritus of The Dallas Morning News and retired chairman, president and CEO of A.H. Belo Corporation.