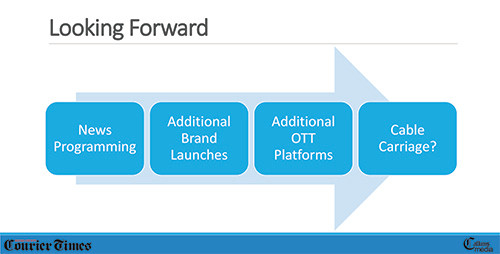 Calkins Media was the recipient of the Mega-Innovation Award presented Friday afternoon at the Key Executives Mega-Conference.

When Calkins Media was named a finalist for last year's Mega-Innovation award, its video stream produced by the Bucks County Courier Times was a repeating four-hour content block. Now, it is essentially a local TV station.

"We actually built a full 24-hour programming day," said Jake Volcsko, digital media and marketing director. "It's a more dynamic experience than it was then. You get a lot more variety."

Calkins Media is based in Levittown, Pa., outside of Philadelphia. The video stream is available through apps for IOS and Android, devices such as Roku, Amazon Fire and Apple TV, and the Courier Times website.

Viewer numbers are impressive. This time last year, people spent a couple of hours with the video stream each week. Now, it's up to nine hours a week, Volcsko said.

As for overall viewers, he said, "Each week we're seeing 10 to 15 percent growth week over week. I've been surprised by that. I really thought it would get to a level and just kind of sit there. But each week I get the numbers Monday morning and I'm like, 'Oh, we grew.'"

In addition to news produced by Courier Times reporters, there are shows on high school sports, local restaurants, cooking and gardening. Third-party content producers are responsible for some shows. A 30-minute local newscast runs five days a week.

Mega-Innovation judges noted a commitment to public service journalism on all platforms. Calkins Media boasts that the organization focuses less on chasing cops and clicks and more on watchdog and enterprise journalism. A former copy editor now serves as TV programmer.

"One of the goals was to do this without adding a whole lot of expense. We really used our internal resources, our reporters. They went from writers to videographers," Volcsko said.

The viewer demographics are attractive to local advertisers. Calkins Media works hard to get their most loyal advertisers to buy into video streaming.

"When we first launched video a couple of years ago, we went to our advertisers and it was a leap of faith by them that this wasn't just a flash in the pan and we were going to stick with this," Volscko said. "We truly want to be a TV station for Bucks County."

The next steps are to continue improving the content and to solidify the demographics, Volscko said. That means research into what the audience is watching at what time of day.

Down the road, two more Calkins papers may start up their own video channels, The Intelligencer in the north part of Bucks County and the Burlington County Times just across the border in New Jersey, he said.

The Mega-Innovation Award is sponsored annually by the Inland Press Association, Local Media Association and the Southern Newspaper Publishers Association.