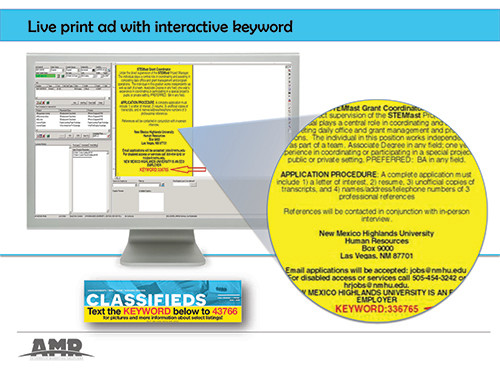 To revive classified advertising, the Albuquerque Journal linked its print product to smartphones. The result has been a positive swing of more than $70 per ad.

"The reach and the interaction will be much greater, particularly the interaction," said Joe Leong, vice president/chief revenue officer of the paper. "Instead of just reading the ad, someone's going to pick up the ad, text the number, and all of a sudden they interact with you completely."

While classified advertising has long been in decline at newspapers, Leong said people have become leery of high-volume online sites such as Craig's List and social media. Local papers like the Journal have an opportunity to get classified advertisers back by building trust, he said.

The Journal outsourced its classified to A Marketing Resource, which handles customer service and retention. AMR has its own sales staff and state-of-art technology. Its sister company, SkyBridge Mobile, developed the program for the Journal.

The Journal retained its legal advertising and obituaries. The Journal considers AMR to be a department and a partner rather than a vendor.

Leong said the paper knew that 90 percent of the population has a smartphone, so the classified ads contain text links. The links make the ads interactive by offering a potential customer options such as click-to-call, email, text messaging, a website, pictures and social media links.

"You can check out the website," Leong said. "The online ad is there. You check out their Facebook. So you get more information instantly before you call. And then you can email."

To see the Journal's old and new classified page design and how it works with smartphones, go to www.abqjournal.com/megaconference.

Contest judges praised the Journal's commitment to and investment in revitalizing classifieds, as well as its use of "all available resources," such as AMR.

The Mega-Innovation Award is sponsored annually by the Inland Press Association, Local Media Association and the Southern Newspaper Publishers Association.