Broadcasting from a newspaper rack 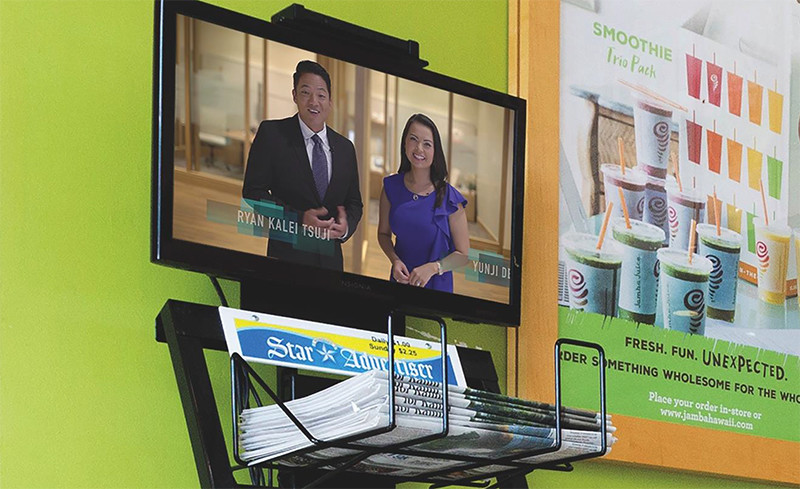 The Honolulu Star-Advertiser was the recipient of the Mega-Innovation Award presented Tuesday afternoon at the Key Executives Mega-Conference.

By putting a computer screen on top of a newspaper rack, Oahu Publications opened up a new profit center. Called the Digital Billboard Network, the screen runs a seven-minute loop of news and advertising in high-traffic areas where people are likely to pass by or stand in line.

"This is a brand new revenue stream," said Dave Kennedy, chief revenue officer for the Honolulu Star-Advertiser. "It's real money, and it's money very quickly. We were up and running right away, making money."

Just since October, DBN has deployed 112 of the new digital newspaper racks with SiteView technology as well as nine wall-mounted screens across the Hawaiian island of Oahu. They're in convenience stores, grocery stores, drug stores, fast food restaurants and a Japanese food court. Screens have audio but some use close captioning where that is more appropriate.

The technology comes from Phoenix Vision Inc., a company that approached OPI with the idea, Kennedy said. The proprietary SiteView system is more than a screen on a rack, however. It has a camera that identifies and records characteristics of people who look at the feed for more than two seconds.

The facial detection technology does not take a picture, Kennedy said. "It detects if you're male or female, or an adult or a young adult or a child. It puts you in a demographic profile and it's a live view, so we can tell who in that profile is looking at your ad at any particular time of the day. And it also helps the retailers know traffic flow, time of day and demographics."

The technology offers another measurement called "opportunity to see," Kennedy said. The camera records people who pass by the rack but don't necessarily lock in on the feed.

The news feature of each DBN feed comes from Star-Advertiser stories delivered by two former veteran broadcast journalists. Each day the newspaper suggests five local news stories. The DBN anchors pick three to highlight on the 60-second news segment, and post on the digital network as well as www.staradvertiser.com and social media.

The rest of the feed is customized advertising or messaging, with some spots going to the newspaper and some to the retail outlet housing the racks. An advertiser can buy into one network feed going to a fast-food restaurant chain, for example, or buy across every network. DBN secured 45 advertisers in less than six months.

The "news minute" also runs on the newspaper website and its social media. DBN offers another outlet for advertisers who already have a video commercial on hand, Kennedy said, or OPI can produce something new. In the case of the Japanese food court that draws 2,000 visitors a day, OPI helped produce tourism-based ads targeted to the location.

The system also has the capability to update the news feed in about 10 minutes in the event of breaking news. OPI intends to go statewide with the network.

"The feedback has been very positive for both our retailers and our advertising side," Kennedy said. "We have not had a retailer say no to us yet. In fact, we can't quite keep up with the demand."

OPI has international rights to sales of the software to newspapers. In the meantime, Kennedy is projecting revenue in excess of $1.2 million for the next budget year. Over 85 percent of revenue has come from non-traditional newspaper advertisers.

"It's making a 70 percent margin already. There's not a lot of cost resources that go into it." Kennedy said. "I paid for the hardware after two months. It's very profitable."

With nearly 900,000 network views in January, Kennedy says DBN already rivals the local TV networks in viewership. "We feel like we could be the top broadcaster in the state within a couple of years."